Obama temporarily barred from Air Force One due to durian-breath

KUALA LUMPUR — US President Barack Obama, on-route to the Philippines after completing a 3-day visit to Malaysia, was denied entry into the presidential plane Air Force One by the Secret Service after his durian-tainted breath triggered the aircraft’s hazardous gas sensors.

Mr Obama, who had just enjoyed a large serving of the thorny fruit known for its pungent, strong smell yet delicious taste, was stopped by his own security personnel at the aircraft door and asked to return to his armoured limousine and taken to a nearby airport VIP lounge where he could ‘decontaminate’ his mouth.

A Secret Service spokeswoman said that this drastic measure was unusual, but needed to be taken for the safety of the entire plane, as the Asian fruit’s overwhelming smell, quoted by some as ‘reeking of garbage stink’, could overcome the other personnel and endanger the flight. 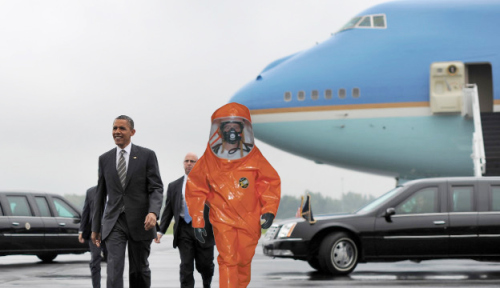 STRONG STOMACH: Obama being escorted away…

This is a photo of the Sg Selangor Dam which I took recently. Its a beautiful dam located at the fringe of Kuala Kubu Bharu, on the way to Frasers Hill.